Researchers have developed a fast-acting skin patch that can deliver medication to treat melanoma in one minute. The research was presented at the American Chemical Society (ACS) Fall 2019 National Meeting and Exposition.

Not only does this research have promising implications for an effective melanoma vaccine, but the technology could also be applied to other vaccinations for infectious diseases too.

Approximately 96,480 people will be diagnosed with melanoma in the US in 2019, according to estimates made by the American Cancer Society, with rates having been on the rise for thirty years. The American Academy of Dermatology states that 20 Americans die every day from this dangerous type of skin cancer.

Taking the pain and inconvenience out of melanoma treatment

The researchers aimed to reduce the number of patients who stop taking melanoma medication because it requires a long application time or involves the use of syringes, which can be painful and inconvenient.

Topical ointments applied to the skin are already available, but the medication can only be absorbed to a certain depth. The new microneedle patches developed by scientists at the Massachusetts Institute of Technology (MIT) are able to efficiently deliver an effective amount of medication in a pain-free, convenient way.

Our patch has a unique chemical coating and mode of action that allows it to be applied and removed from the skin in just a minute while still delivering a therapeutic dose of drugs. Our patches elicit a robust antibody response in living mice and show promise in eliciting a strong immune response in human skin.”

The patches are made with a layer-by-layer (LbL) coating method. Each layer of the patch is covered in molecules with alternating positive and negative charges.

In order to get a strong layer of medication on the patch’s surface, each layer of the patch needs to be firmly attached to one another and to the microneedle.

However, Yanpu He explained that the attraction between the layers of positive and negative molecules “makes the entire film very sticky. Past methods, which have retained this ‘sticky’ nature, can take up to 90 minutes for a sufficient amount of drug to leave the patch and enter the skin.”

This means that, because the film is held together firmly the solubility of the base layer of the patch is decreased, as a result hampering the implantation of the medicated films into the skin.

In order to rectify this problem and significantly reduce the amount of time it takes for the drug to be administered, Paula T. Hammond, PhD, with He, another graduate student Celestine Hong, and a team of MIT colleagues, produced a new, pH-responsive polymer made in two parts:

The first part contains amine groups that are positively charged at the pH at which we make the microneedles, but that become neutral at the pH of skin. The second part contains carboxylic acid groups with no charge when the microneedles are made, but which become negatively charged when the patch is applied to the skin, so there is an overall change in charge from positive to negative.”

The patches showed sustained release of the drug into the skin

The patches were tested on mice and on samples of human skin. The paper, published in ACS Nano, described the efficacy of the patches.

“Following microneedle application to mouse ear skin for one minute, the LbL films were completely transferred from the microneedle surface onto the epidermis.

“Sustained release of [the melanoma drug] from the implanted LbL films was observed over 3 days in vivo, and a robust immune response was promoted via the microneedle-delivered […] LbL film.”

The researchers developed a melanoma vaccine by creating an antigen that contained a signal for the immune system so that it strengthens its responses to certain markers often seen in melanoma cells.

After testing a range of LbL microneedle films with different arrangements of antigens and immune system signals in mice, they were able to find the best LbL film structure that activated the immune cells in the skin quickly.

In mice, the researchers found that these immune cells could travel to the lymphatic system to recruit more immune cells to attack the melanoma cells and fight tumors. 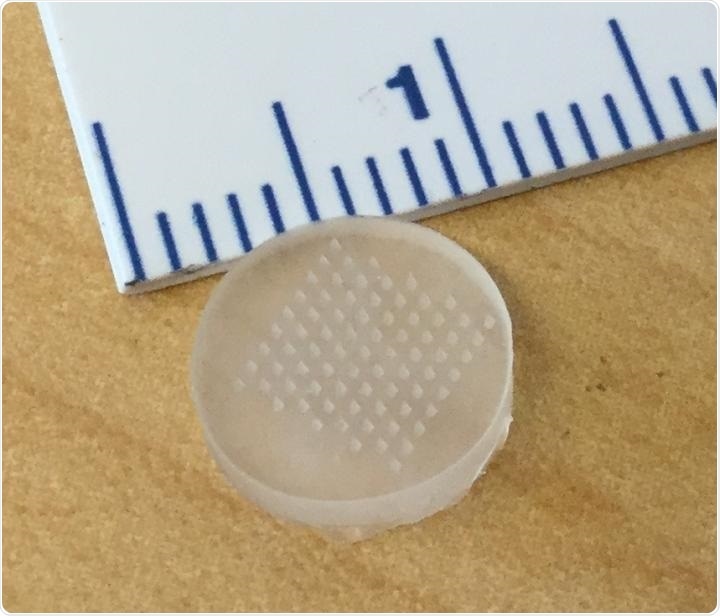 The new microneedle patch can deliver medication for melanoma within one minute (ruler is in centimeters). Credit: Celestine Hong and Yanpu He.

Hammond was enthusiastic about the patch’s application in treating infectious diseases. Our patch technology could be used to deliver vaccines to combat different infectious diseases. But we are excited by the possibility that the patch is another tool in the oncologist’s arsenal against cancer, specifically melanoma.”

“We are using low-cost chemistry and a simple fabrication scheme to transform vaccination,” Hammond continued. “Ultimately, we want to get a device approved and on the market.”

“SEO is a marketing function for sure, but it needs to be baked into a product, not slapped on like icing after the cake is baked.” – Duane Forrester. Visit The Online Publishers TOP online publishers.

Digital Marketing Agency – What to Expect From

5 Reasons TOP Is The Best Digital Marketing Agency To Sign Up With.

The Best Option For Getting Quality Positive Reviews For Your Business.

Benefits of Foreign direct investment to the recipient country.

3 Reasons To Think About TOP For Online Reputation Building.

2 Reasons All Online Reviewers Need To Be With TOP.

3 Ways To Get Success With Freelance Jobs On TOP.

How Advertisers Can Get More Out Of A Site With TOP.

Democratic hopeful Steve Bullock on what Amazon and President Trump have in common, and why young voters should care.